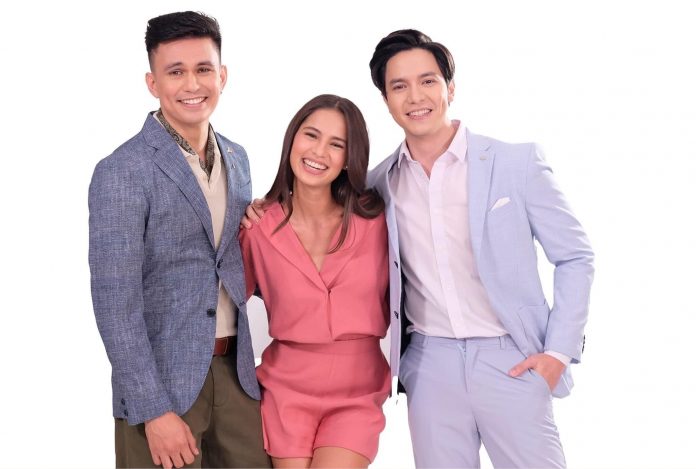 Is love really so powerful and great that it can move mountains and weather any storm? Can a person truly live through insurmountable odds and cross the world – no matter how wide the distance or how much time has passed – just to be with the person they hold dear?

GMA Network delights viewers with the enthralling tale of romance between two individuals whose love has always been opposed by forces and how fate always brings them back together in the much-awaited primetime series, The World Between Us, premiering this July 5.

Three of the country’s most in-demand and highly-talented actors headline this drama series: Asia’s Multimedia Star Alden Richards as he takes on the remarkable role of Louie Asuncion, the intelligent orphan who has a penchant for inventing gadgets and who will work his way up to prove that he is worthy of Lia’s love; award-winning actress Jasmine Curtis-Smith who is set to charm audiences with her mesmerizing portrayal of Lia Libradilla, the lovable and compassionate youngest member of the affluent Libradilla family who will fall for Louie despite their differences; and Kapuso prime actor Tom Rodriguez in his most offbeat role yet as Brian Libradilla, the stubborn and bullheaded eldest heir of the Libradilla family who never sees Louie as his equal and disapproves of his affection for Lia.

Alden, who at first felt apprehensive to take on the role of Louie, admits that his character’s depth prompted him to accept the project, “When we started reading the script, iba ‘yung binabasa mo na siya from naririnig mo lang ‘yung kuwento. That started the fire within me to create this character na very relatable. With the cast, the story, the director, I think this is going to be one of my best teleseryes in five years.”

Jasmine, in turn, reveals what is the secret behind her undeniable on-screen chemistry with Alden, “Pareho kaming in love sa characters namin and sa story nilang dalawa so that makes the chemistry so much easier kasi ramdam mo ‘yung kilig ng character mo. We’ve done projects before and although short period lang ‘yun, it was still enough to build a good foundation. I’m grateful kasi it’s been so fun and easy to work with Alden.”

Meanwhile, Tom shares how he resonates with the complexity of his character, “At first glance, it may seem like mahirap maka-relate kay Brian. But as I read the script even more, one thing became so clear – that he’s a wounded person. Having been wounded myself in my life, maybe not to the same extent that he has, mas na-curious ako what makes him that way. I realized that he’s only hungry for love and affection.”

Making this series even grander is the glittering roster of cast including Sid Lucero as Eric Carlos, Lia’s two-faced childhood friend who secretly fancies her; Kelley Day as Audrey Villacer, the fierce and confident young executive from Next Phone who will develop romantic feelings for Louie; Yana Asistio as Jackie Carlos-Libradilla, Eric’s sister and Brian’s wife who is also Lia’s close friend; Jericho Arceo as Edison Tomas, Louie’s gentle giant and caring friend who is equally geeky and passionate for technology; Donn Boco as Pitoy Flores, Louie’s loyal and trustworthy friend who loves to look for solutions to tech-related problems.

The World Between Us features the special participation of Glydel Mercado as Clara Asuncion, Louie’s doting and supportive mother whose death will fuel his son’s drive to strive harder for his dreams.

Witness the enthralling love story of Louie and Lia in The World Between Us – under the helm of esteemed director Dominic Zapata and assistant director Aya Topacio – beginning July 5, weeknights, on GMA Network.

Viewers abroad can also catch the program via GMA Pinoy TV. It will also be available for streaming via iQiyi International or IQ.com for subscribers in the Philippines.

For more stories about the Kapuso Network, visit www.GMANetwork.com.