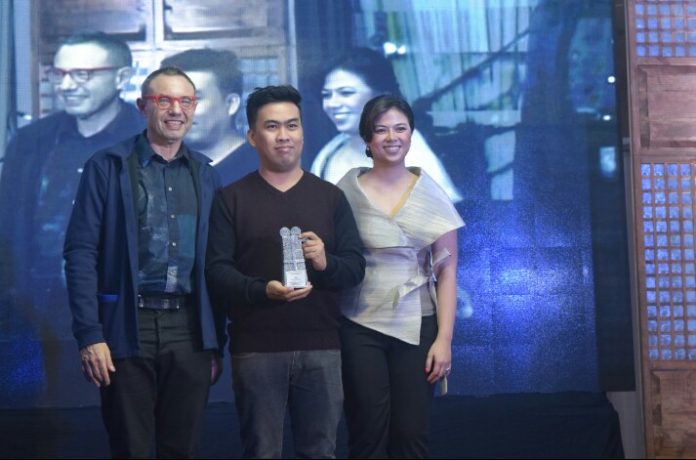 The Film Development Council of the Philippines named University of the East College of Fine Arts, Architecture and Design (UE CFAD) advertising professor and filmmaker Richard Soriano Legaspi as one of the honorees when it recognized recent international film festival winners and other achievers during the second Film Ambassadors’ Night held at Sampaguita Gardens in Quezon City last February 9.

FDCP honored Legaspi’s short film Pipo, which tells the story of a boy who wants to have a picture of his family taken for a school assignment. Starring Maliksi Morales in the title role, the film also features Lou Veloso and Chanel Latorre, among others. It won the viewer’s choice award during the Asian and Middle Eastern Film Night of the fifth Gatffest Film Festival in Kingston, Jamaica last year.

Pipo has been selected to compete in more than 35 international film festivals around the globe so far. It also previously won the grand prize in the professional section of AnakTV’s Sinebata (children’s films) competition, 8-12 fiction category (based on target audience). The film pays tribute to manual film cameras and photographers who people often fail to acknowledge for documenting precious moments in their lives. It was produced by Red Room Media Productions through the support of the National Commission for Culture and the Arts, Università delle Idee and Cittadellarte-Fondazione Pistoletto.

Legaspi is a graduate of Bachelor of Fine Arts, major in Advertising Arts at the then UE College of Fine Arts in Caloocan. He eventually ended up teaching in his alma mater. He is a Gawad CCP awardee in 2010 and 2011, a recipient of the Carlos Palanca Memorial Awards for Literature in 2012 for his screenplay Primera Bella and a Cinemalaya winner and Gawad Urian nominee for his short film Manenaya. He is also a graduate of Ricky Lee’s 14th scriptwriting workshop, a directing fellow at the Asian Film Academy in Busan, South Korea, and a recipient of the UNESCO-Aschberg Laureate Artists of 2013, a scholarship program that offers residencies to artists worldwide. He was invited last year by the Taoyuan Cultural Department to stay in the heritage village of Sianguang 2nd Village for his socially engaged art projects. Dubbed as “an evening of celebration, thanksgiving and gathering of award-winning Filipino films and filmmakers,” the Film Ambassadors’ Night was first launched last October 2016 to cite those who continue to bring not only prestige to the country but has also raised the level of awareness to the craft and art of filmmaking.