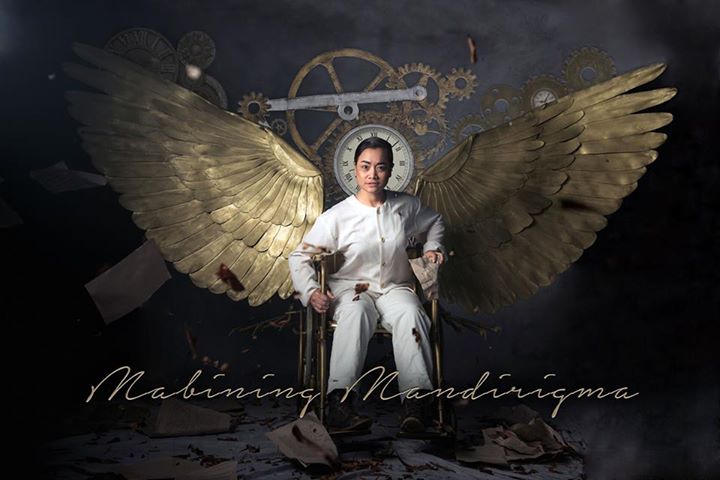 Manila, Philippines – Unsullied integrity and unrivaled dedication to the welfare of the Filipinos. History once again unfolds as we give light to the events in the life of one of our national heroes, Apolinario Mabini. Tanghalang Pilipino, the resident theater company of the Cultural Center of the Philippines, with the support of the National Commission for the Culture and Arts, opens its 29th Season with Mabining Mandirigma, a contemporary dance musical that foregrounds the legal and diplomatic heroism of Apolinario Mabini.

As the culminating production to commemorate the sesquicentennial birth of Apolinario Mabini, “Mabining Mandirigma” promises a highly-charged musical that will take the audience to a different journey through history. Steampunk, a subgenre of science fiction that incorporates technology and aesthetic designs inspired by 19th Century industrial steam-powered machinery, provides a fitting backdrop to an already action-packed musical. “Mabining Mandirigma” runs at the Cultural Center of the Philippines’ Tanghalang Aurelio Tolentino (Little Theater) from July 3 to 19, 2015, Fridays to Sundays, with 3 o’clock in the afternoon (Matinee) and 8 o’clock in the evening (Gala) shows.

Apolinario Mabini 1898, as President Emilio Aguinaldo’s Adviser, Cabinet President, and first Foreign Minister, Mabini displayed a warrior’s spirit that belied his paralytic body and a principled character that could not be compromised by considerations of personal aggrandizement or political expediency. Without fear, he fought the ilustradocacique clique in the Malolos Government that issued government bonds that would allow them full control of the new government’s finances and activities. When Aguinaldo replaced Mabini with the political chameleon Paterno as cabinet president, Mabini, now much weakened by sickness, continued to support the masses fighting the American invaders, even long after Aguinaldo and his generals had capitulated to the new conquerors. To cut him off from the revolutionists, the Americans exiled Mabini to Guam. In 1902, his captors shipped him back to the Islands because he promised to finally take his oath of allegiance to the United States of America. But as soon as he landed in Manila, he pursued his revolutionary activities until his demise by cholera in 1903. Apolinario Mabini’s life is as testimony that there exists a politician who can forge and sharpen the sword of his integrity in the smithy of even the dirtiest kind of politics and still emerge unbroken, pure, and unblemished.

“Mabining Mandirigma” will be directed by the Cultural Center of the Philippines’ Vice President and Artistic Director Chris Millado and written by Dr. Nicanor Tiongson, the stellar cast is led by Delphine Buencamino essaying the role of Apolinario Mabini; promising young tenor Arman Ferrer plays Emilio Aguinaldo, while Carol Bello plays Mabini’s Mother, Dionisia as they are joined by the Tanghalang Pilipino Actors Company. The powerhouse Artistic Staff is comprised by Jed Balsamo for Music, Denisa Reyes for Choreography, Toym Imao for Set Design, Katsch Catoy for Lighting Design, GA Fallarme for Projection Design, James Reyes for Costume Design, Barbie Tan-Tiongco for Technical Direction and TJ Ramos for Sound Design. Writer JV Ibesate is part of the Tanghalang Pilipino Actors Company and last appeared in Ballet Philippines’ “MANHID: The Pinoy Superhero Musical.” He graduated with a degree in Broadcast Communication, cum laude, from the University of the Philippines, Diliman. JV will be essaying the role of political turncoat Pedro Paterno in this production.

Tanghalang Pilipino, as the resident theater company of the Cultural Center of the Philippines, Tanghalang Pilipino envisions raising Philippine theater to heights of professional and artistic excellence, dedicated to developing and training actors, playwrights and designers with special emphasis in the production of original Filipino plays. By staging plays from the repertoire of Philippine past and plays in translation from other countries, TP hopes to bring to the experience of both artists and audience the best of Philippine and global theater tradition. Tanghalang Pilipino maintains a regular training program for actors through its Actors Company. The only one of its kind in the country, the Actors Company is a pool of professional theater actors who go through intensive training in acting, movement, dance, voice, script analysis, improvisation, directing and other production-related courses. Members of this prestigious and privileged group are among the most respected artists in Philippine theater, television and film communities. Now on its 29th Theater Season, Tanghalang Pilipino promises to present high-caliber productions celebrating Filipino artistry in the next years to come.