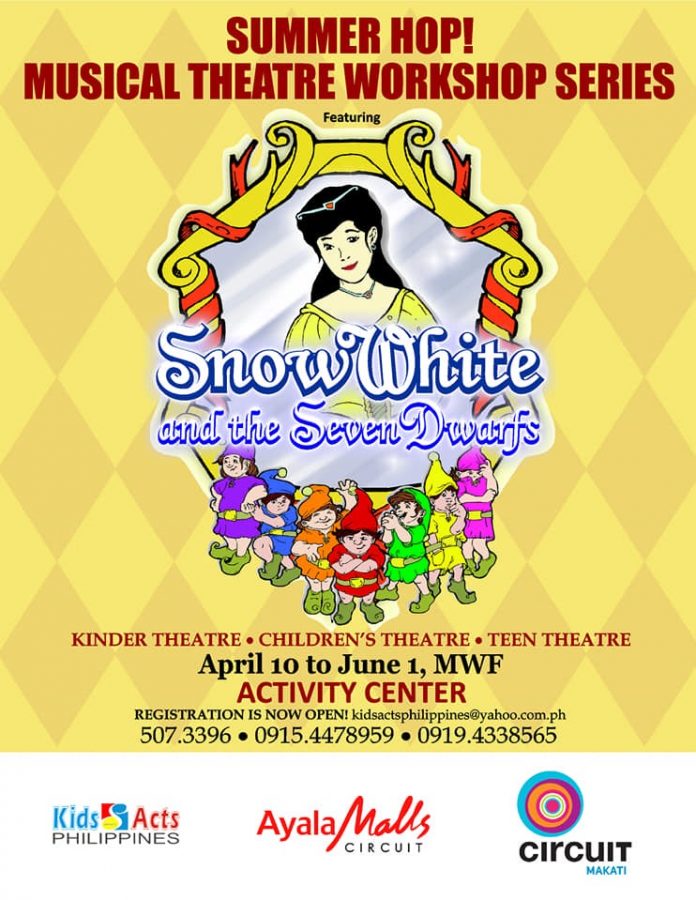 Experience the magic this summer!

The workshop will be held from April 10 and shall run up to June 1 (Mondays, Wednesday and Friday). This is open for 3-7 years old (Kinder Theater), 8-10 years old (Children’s Theater), 11-13 years old (Junior Theater); 14 years old and up (Teen Theater) and the Camp Art Scholars.

Kids Acts Philippines is the premier children’s theater company in the Philippines, founded by two award-winning Filipino Directors – Luigi Nacario, Best Stage Director in a Musical by Aliw Awards and Best Writer and Lyricist for a Filipino Musical by BroadwayWorld Philippines; and Eugene Belbis, Best Musical Director by Aliw Awards.

KAPI, as what it is popularly known, was named as Best Theater Company by BroadwayWorld Philippines in 2013.

For seventeen years, it has created and produced a number of adapted and original children’s musicals performed by an all-kids cast, a pioneer in the Philippines and Southeast Asia.

Aside from creating and developing new musicals, Kids Acts Philippines, through its TheCampArt Performing School, provides workshops and trainings on acting, music, and singing to students as an after-school activity during school year and to kid dependents of top corporations and companies during summer.

KAPI is being regarded as one of the best and largest workshop providers in the country following an international syllabus for theater education integrated by its own acting approach called S.A.F.E. Acting Technique.

KAPI trains children to become artists underpinning with theater discipline until their stars shine on Stage, TV, and Film.