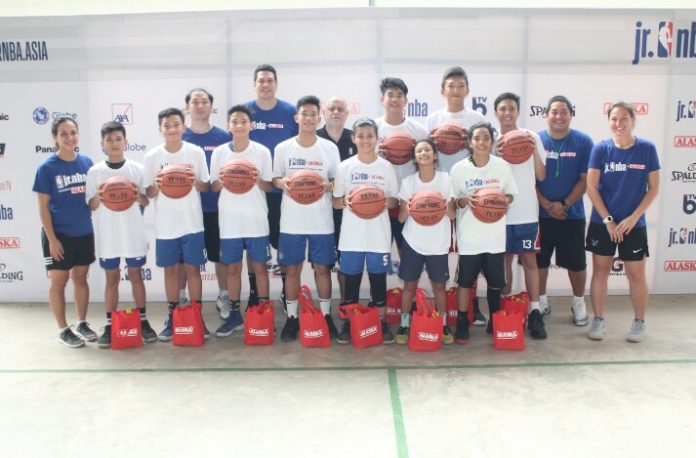 Jr. NBA Philippines 2018 presented by Alaska continues its search for skillful ballers aged 10-14 as it visits Agusan for the second Regional Selection Camp in 2018.

Young cagers in Mindanao and surrounding localities as well as interest participants outside of Mindanao are invited to attend the camp on Feb. 24 at Father Saturnino Urios University starting 9 a.m.

Boys and girls born 2004-2008 are encouraged to take advantage of the league’s global youth basketball participation program to not only learn the fundamental basketball skills set but also the Jr. NBA S.T.A.R values of Sportsmanship, Teamwork, a positive Attitude and Respect.

The Agusan Camp will be run by Jr. NBA Coaches Carlos Barroca along with other Jr. NBA coaches from presenting partner Alaska.

Registration and participation are free. On the first day, participants will be measured in a series of vitals tests and skills challenges, with their scores determining their return the following day to undergo more basketball drills and team exercises.

On the second day, the remaining participants will immerse in team drills and showcase team and individual skills in the scrimmages. The camp’s top performers will be selected to represent Mindanao in the National Training Camp in Manila on May 18-20.

The Jr. NBA National Training Camp is the third phase of the Jr. NBA program that will select the most outstanding eight boys and eight girls as Jr. NBA All-Stars from the Regional Selection Camps.

The Jr. NBA Philippines 2018 All-Stars will embark on a unique, overseas NBA experience together with fellow Jr. NBA All-Stars from Southeast Asia later this year.

Two more Jr. NBA Regional Selection Camps will be staged in Baguio and Manila on March 17-18 and April 7-8 respectively.

Qualified boys and girls can still register at www.jrnba.asia where the program terms and conditions can be found.