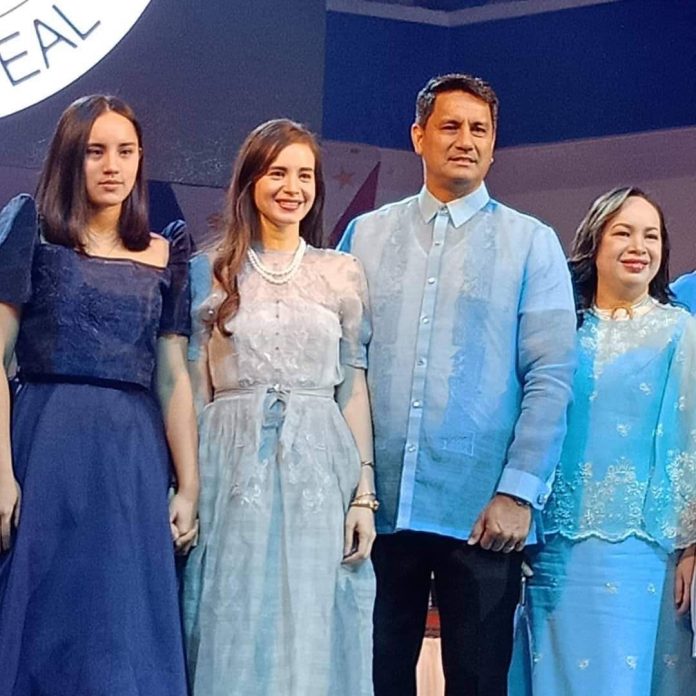 “I look forward to working with them and delivering to Ormocanons the projects and programs that I have envisioned for Ormoc in the coming years,” said Mayor Gomez.

“Thank you very much for your confidence and trust in my administration, for giving me a second chance to lead you…I am humbled by your presence, and more so, on the validation that Ormocanons have given to my leadership by giving the Ormoc Development Team a ‘13-0’ win. I was told it was an historic win,” he told the audience.

Mayor Gomez here vowed to push for the realization of a new water system project in his second term as local chief executive.

The undertaking, he said, will focus on developing the city’s Lake Danao, the region’s biggest, as a major source of water to address the shortage being experienced by residents.

The lake has been one of the sources of water of six Leyte towns and Tacloban City, but it has not been tapped to provide water for Ormoc, he noted.

“It is also ironic that six towns and one city are benefiting from Lake Danao, while Ormoc suffers. It’s time for us to harness the lake’s resources for our own use and solve our water problems for the next 25 or more years,” Gomez said.

In his inaugural speech, Gomez promised to bring more improvements to the city, which, in the past two years, was declared as one of the safest cities in the country.

Another program that his administration will be focusing on is disaster response, to ensure that each barangay in the city is not complacent and always ready to face a disaster.

Gomez added that they will also work on banning single-use plastic by 2021, increase and strengthen livelihood programs, create sustainable tourism products, implement the City Land Use Plan and zoning ordinances, and clear the national highways of illegally parked vehicles.

Following his “Let’s Get Ormoc Moving Ahead” slogan, Gomez hoped to start working on making the Lake Danao Water System a reality right away.

“Water has always been a contentious issue in this city, but one thing is certain, we cannot continue to solve water issues on a piece meal basis. It is also ironic that six towns and one city are benefiting from Lake Danao, while Ormoc suffers. It’s time for us to harness the lake’s resources for our own use and solve our water problems for the next 25 or more years,” said Gomez.

Next in his agenda is the launching of the modernization program of the city’s transportation system, in line with the national program, on July 1.

His other major projects include solving the “growing need for shelter” in Ormoc, opening up more roads and schools, and increasing their capability to respond to disasters.

“The year 2018 and the first half of 2019 have been kind to Ormoc. There were no life-threatening calamities, but we cannot be complacent. We have to be ready for eventualities. We will be acquiring more ambulances, water trucks and fire trucks. We will put more automated external defibrillators (AEDs) in big barangays, and will continue to support programs on disaster prevention,” the mayor said.

Gomez revealed his long-term vision for Ormoc, which includes inviting industries that produce energy from waste and trash to locate in the city.

“Rather than looking at waste as such, we can view it as a resource. The national government is giving grants for projects like this. I also dream of constructing a large scale composting facility, as well as community composting in the barangay level,” he said.

“We must also ban the use of single use plastics by 2021. We have to be decisive in this area if we must save Mother Earth for our children and their children. In response also to the needs of our people, we will be launching more health and wellness programs,” added the former actor and model.

Other “big projects” that Gomez said are in line for the next three years are the slaughterhouse upgrade; Improvement of the “Lechonan”; main market improvement; the “bagsakan” backfilling; enhance peace and order programs and upgrade its street lights; lights and fans for the Superdome; health, education, and social welfare; increase and strengthen livelihood programs; create sustainable tourism products; implement our city land use plan and zoning ordinances like relocating vulcanizing shops to areas where they have ample parking; and clear the national highways of illegally parked vehicles.

Meanwhile, Rep. Gomez also said that “the best is yet to come” in Ormoc and in the Fourth District under her term. And part of her inaugural speech was for husband Mayor Richard.

“To all who fought with us, from 2010 until now, thank you. You have fought for us and with us, and together with each battle won, all the victories both big and small, we continue to build and layer on our gains.

“It took time. And in our case, time was really an ally, Sa tanan na ni tuo sa damgo ni Mayor Richard for Ormoc since 2010, back when he only had 3 men with him, thank you. He has had to earn your trust, your respect. As his wife, I say thank you for embracing this man, once upon a time just a stranger from Manila, who happened to fall in love with an Ormocana, as one of your own.

“Now he is an Ormocanon, in every way that matters. Thank you for giving him the opportunity to serve. That is his joy and purpose, to not just dream  better dreams, but to infect you with that same dream, and together lead and inspire people to work together to make those dreams come true. Mayor, thank you for the inspiration, and for the courage. I do not think I would be half as brave to take on all I’ve had to take on without you by my side. I will fight any war with you.”

Ricky Gumera wants to follow in footsteps of Jay Manalo