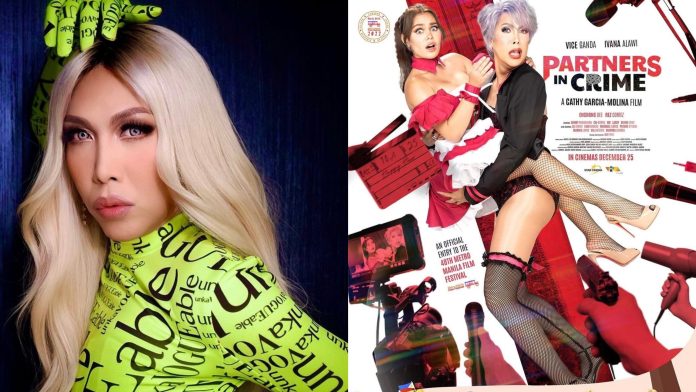 Vice is known for his brand of comedy under the direction of the late Wenn Deramas. This time, Box Office director Cathy Garcia-Molina is taking over with her own style of comedy. “Excited talaga ako to be Cathy-fied. Kahit nung unang tagpuan namin, ang unang tanong nila sa akin, ‘What do you expect?.’ I will willingly embrace my Cathy-fication. The Cathy-fication of Vice Ganda this Christmas, ‘yung ganun,” he shared.

Last month, Star Cinema released a teaser of “Partners in Crime” that went viral. Based on the video, Ivana’s character is seen calling it quits with Vice’s character, throwing invectives offensive, saying she doesn’t want to see him ever again.

The Queen Of MMFF met Ivana at his popular talk show “Gandang Gabi Vice” and fell in love with the social media star. Fans are super excited and grateful to Vice. His brand of comedy will always be part of Filipino Christmas. Without Vice’s movie, Christmas is boring.

Will he earn the number one spot again?

“Partners in Crime” hits cinemas this December 25. Other cast members will be revealed soon.