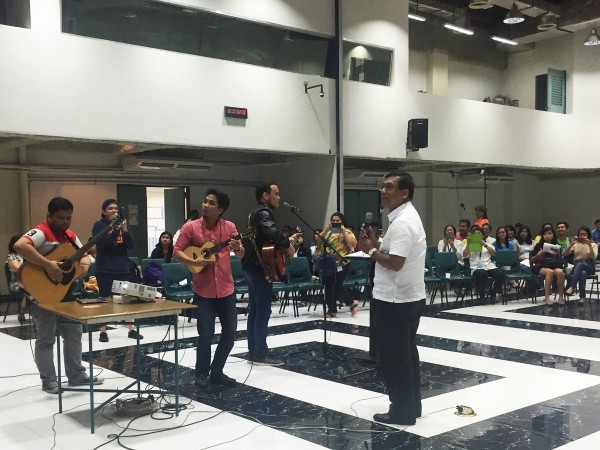 “ Handa…Awit…Lindol!” will be the first ever Pinoy-produced album that taps on music to help prepare for an actual earthquake disaster. The music album on disaster is produced by Guro sa Sining ng Bayan, an organization composed of students and professors in the Philippines.

“My first thought was how to make it (disaster response procedure) easier and simpler for people in a community to understand because our enemy was the technical aspect of earthquakes,” says Leomar Requejo, a Filipino language professor.

Songs are known for their subconscious effect on people, which enables them to remember a lot of things easily. “Handa…Awit…Lindol!” contains songs that highlights particular topics on disaster preparedness, which includes what items to prepare in case of an emergency to what should be done when experiencing an actual earthquake. The magnitude 7.2 quake that hit the Visayas region in 2013 inspired the group to start the project. It was not an easy endeavor as it took them more than a year to complete the album plus tons of revisions to the lyrics and musical arrangements. One of the commendable things as well is how the group tapped into the expertise of Philippine Volcanology bureau to help out with the right phrasing.

“Earthquake preparedness is very important. We’re one of the earthquake prone countries of the world, and in the past 400 years we have suffered from 90 destructive earthquakes, and we need to make sure that people know what to do,” says Philippine Volcanology bureau director Renato Solidum.

How much is “Handa…Awit…Lindol!” album? Well, it is for free. You can get the album at the Volcanology bureau or download it online. The same album will also be distributed to LGUs and aired over public channels.