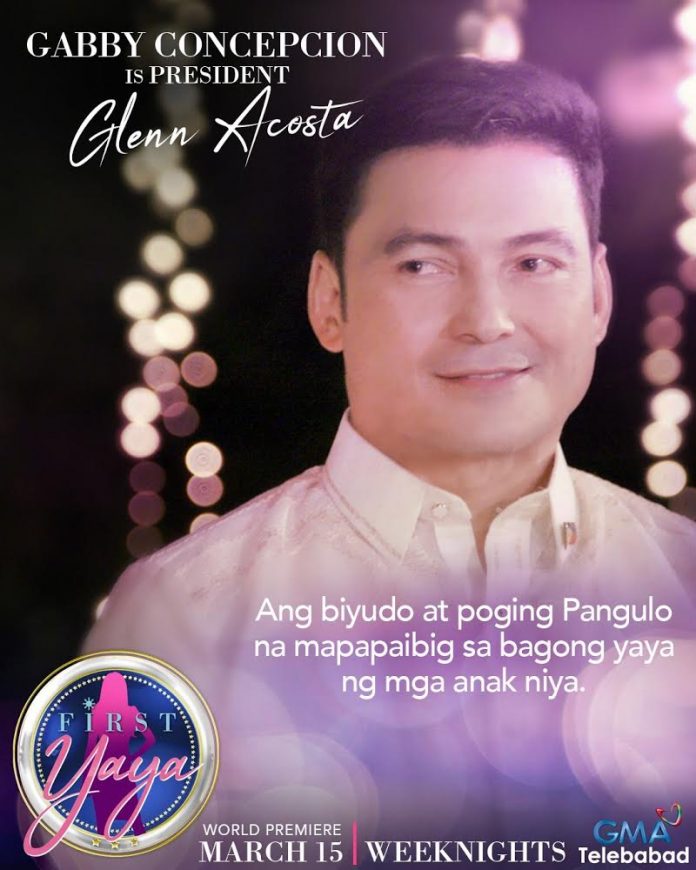 Beginning (March 15), feel the kilig and excitement as GMA Network unveils the aspirational story of an ordinary woman who gets to lead an extraordinary life as the nanny of the President’s children and along the way, falls for the country’s highest officer in the romantic-comedy series “First Yaya.”

Playing an important role in the primetime soap is seasoned actress Ms. Pilar Pilapil as Blesilda Acosta, Glenn’s wealthy and doting mother who will stop at nothing to make sure her son becomes the most powerful man in the country.

Set to make their love team debut in their very first drama series together are Cassy Legaspi as Nina Acosta, the rebellious and eldest daughter of the President who initially rejects Yaya Melody; and promising Kapuso actor Joaquin Domagoso as Jonas, a student activist and critic of President Glenn who unintentionally falls for Nina.

Also starring are the characters from President Glenn’s life: Gardo Versoza as Luis Prado, the incumbent Speaker of the House and President Glenn’s foe disguised as an ally; Maxine Medina as Lorraine Prado, Glenn’s feisty coworker who is determined to be the First Lady at all costs; Kakai Bautista as Pepita, the dining manager at the Presidential Reception house who makes life difficult for Yaya Melody; Cai Cortez as Norma, President Glenn’s trusted maid who becomes Yaya Melody’s confidante; Thou Reyes as Yessey, President Glenn’s overbearing but loveable millennial chief-of-staff; Hailey Mendes as Charlie, best friend of Jonas who secretly fancies him; Patricia Coma as Nicole Acosta, President Glenn’s second daughter who instantly likes Yaya Melody; Clarence Delgado as Nathan, President Glenn’s middle child who is often the mediator between Nina and Nicole; Thia Thomalla as PSG Val Canete, boyish security detail primarily assigned to President Glenn’s children who is not aware of her beauty; Jon Lucas as Titus de Villa, Speaker Luis’ most trusted right-hand man; Glenda Garcia as Marni Tupaz, a veteran political reporter who is often critical of President Glenn.

Joining them are the members of the Sanya’s family, the Reyes family: Sandy Andolong as Edna Reyes, Melody’s mother who is an emotional wreck and believes in all things practical; Buboy Garovillo as Florencio Reyes, Melody’s father with whom she shares the strongest filial bond; Analyn Barro as Gemrose Reyes, Melody’s sister who is often at odds with her; Anjo Damiles as Jasper, Melody’s first serious boyfriend who eventually breaks her heart; and Jerrick Dolormente as Lloyd Reyes, Melody’s youngest sibling who is very supportive of her.