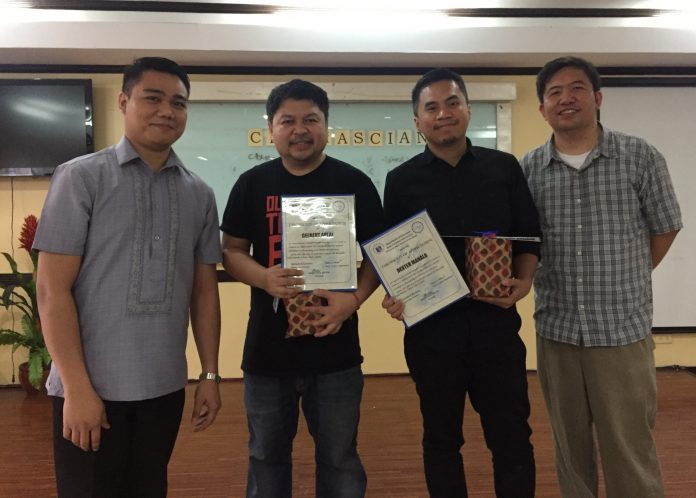 Manila Science High School conducted a seminar-workshop on filmmaking for junior high school students at Barotilla Hall last September 18. This was held in preparation for Cinemascian 2019.

Cinemascian is an an annual film competition which aims to showcase students’ skills and creativity in the art of filmmaking, to allow them to express their views and insights on social issues surrounding them as youth through film, and to use film as a tool for social awareness and effecting change.

This year, the silver jubilarians, MSHS Batch 1994, offered their support by holding free sessions on filmmaking and video production for all Grade 10 Humanities classes under Mr. Richard Bautista.

Photographer and videographer Gelbert Aplal, advertising and content producer Dexter Manalo and advocacy filmmaker and film educator Seymour B. Sanchez, all from Batch 1994, conducted the talks.

Aplal shared practical tips on using the camera and other video production equipment. Manalo explained how the production process is carried out from ideation to final video output while Sanchez discussed ways on making the story more visual, writing the script and planning the shoot.

Students from 10-Einstein and 10-Newton attended the first session. The second session had 10-Faraday and 10-Roentgen while the last session had 10-Copernicus, 10-Lawrence and 10-Moseley.

Each section is required to submit a short film as their entry to Cinemascian this year. All entries will be judged based on storytelling and message, 40 percent; technical quality, 40 percent (10 percent each for cinematography, production design, editing and audio/music/sound effects); and acting, 20 percent.

With the approval of Principal Maria Eva Nacion and in cooperation with the Science Department led by Mark Gil Tabor, MSHS Batch 1994 is also organizing the “Agham: Kaakibat sa Kaunlaran ng Lipunan at Ekonomiya” (AKKLE) program. Patterned after the alternative classroom learning experience or ACLE, it will be held at Alzona Hall and in eight classrooms at the Science and Maceda Buildings on October 11, Friday, from 8 a.m. to 12 noon.

The talks are part of the silver jubilarian’s series of activities, which was launched at Alzona Hall last July 12 with the Google talks on innovation led by Rikki Macolor and Amante Alvaran. The event, which will be held in line with the MSHS Foundation Week, is envisioned to establish a channel to introduce alumni and their respective fields of expertise to the current students as speakers.