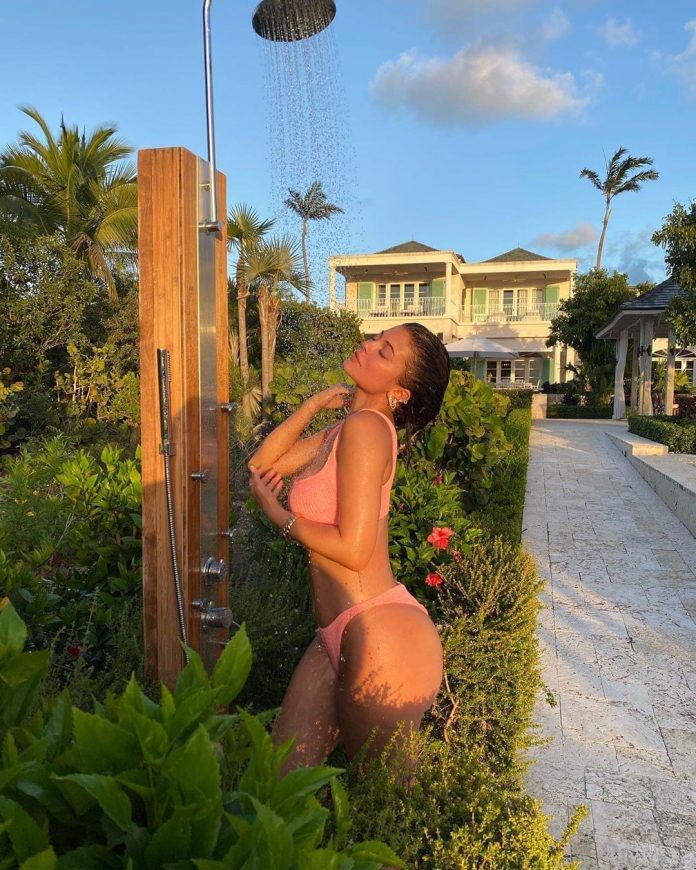 Kylie Jenner is making headlines for her steamy bikini pictures but eagle-eyed fans seem to have spotted a “photoshop fail” in one of those.

The 22-year-old star shared a string of pictures on Instagram with the caption “Taco Tuesday” from her $36.5 million Holmby Hills home.

In the set of sexy images uploaded on Instagram, she can be seen basking near the pool as she flaunts her derriere and flat midsection in a patterned thong bikini by Lovewave from Revolve.

No sooner did she post it, fans and friends couldn’t stop talking about it. Referring to her ‘Tiger King’-inspired TikTok video, one fan said, “More Tiktoks today?” and another said, “Yes I would like 3 tacos and a side of Kylie thank you lol.”

While fans complimented her pictures, a few spotted a photoshopped image in one of the slideshows she had posted. The media personality was quick to delete it barely 20 minutes after uploading it.

Eagle-eyed fans spotted the edit and quickly screenshotted the picture.

One fan shared, “Your 300000€ Surgeries were not enough you need to photoshop all your pics?”

However, her fans and followers already noticed it and commented upon the alterations.

“Kylie is a master at Facetune and photoshop,” one user wrote and another said: “I’m trying to work out what she was even editing.”

One posted a snarky comment on Twitter, “Don’t you mean ‘plastic surgery’ Tuesday?” and another said, “To any young girls looking at this. Please know you’re perfect the way you look and regular people don’t always look like this (without surgery). Be happy and stay inside for now!”

A few fans were jealous of her picturesque resort-style abode, and wrote, “Her “house”/resort is bigger than the city I live in and I have a ten-year-old iPhone.” Another said, “Show us around your new house!!”

Even with the Coronavirus crisis and the essential need for social distancing, the reality star has been extremely active on social media.

She also shifted to a new house in the last few weeks and Twitter users can’t stop slamming her.

“When quarantine hits you like every other human being but then you remember that you have to set an unrealistic standard for women that you yourself can’t achieve without money, effort and time #KylieJenner,” one wrote.

Another said, “We’re all out here talking about the struggles of quarantine but has anyone even considered how hard this has been for white girls that don’t know how to do brownface without their hair and make-up crew? Pobrecitas. #KylieJenner.”