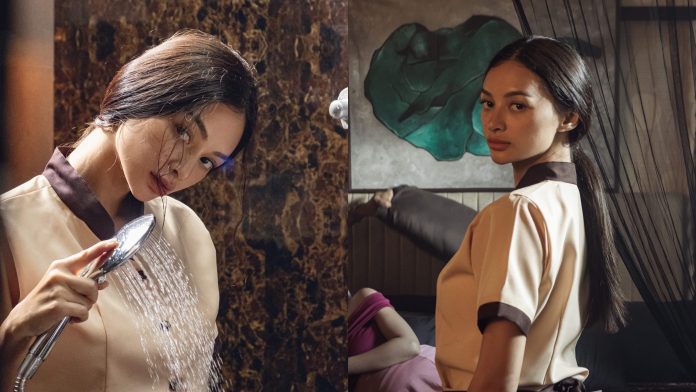 Kylie Verzosa plays Daisy, a woman in her 20s who is offered a huge salary mainly to take care of Nami, daughter of William (Albert Martinez), a billionaire, and Roxanne (Louise Delos Reyes), who is pregnant with twins.

Daisy succeeds in building rapport with the young child, but that’s not all. She gets the attention of her boss as well. William begins to secretly flirt with Daisy, enticing her with glasses of wine and his piano playing, and they eventually begin a sexual relationship.

Since Daisy has become somewhat chummy with Roxanne, the latter finds nothing suspicious about her. But there is someone in the mansion that Daisy cannot fool.

Ms. Martha (Jaclyn Jose) is the Mayordoma who she knows everything that is happening inside the house. Nothing escapes her keen eyes. Though she harbors resentment towards her employers, she continues to do her job well.  She’s been with Roxanne since she was a child.  Will Martha’s loyalty to William’s wife be detrimental to Daisy?

Apart from Ms. Martha, Daisy also has to be mindful of the presence of Roxanne’s mother, Madam Ester (Alma Moreno). Although Ester has no power over her very domineering son-in-law, she is still a mother who must protect her daughter.

What does Daisy expect to get out of her stolen moments with William?  What is the price to pay for sleeping with this powerful married man?

Directed by Roman Perez, “The Housemaid” is an adaptation of a South Korean film that was first shown in 1960, then had a remake in 2010, originally entitled “Hanyo.” The latter won awards in different international film festivals, including Fantasporto in Portugal, Oslo Film from the South Festival, and even our very own Cinemanila International Festival. It received a nomination for the Palme d’Or, the highest prize awarded at the prestigious Cannes Film Festival.

Director Perez said that he watched both Korean versions, carefully noting what’s similar and different about them. He guarantees that he was able to incorporate the Filipino context and adapt it to the treatment of this film.

“The Housemaid” also stars child actress Elia Ilano who played the young Maya in “Ulan,” and Jobelyn Manuel, the original “Jowable” woman ranting on Vincentiments Facebook page before it became a blockbuster movie.

Perez also shared, “We got all the actors we wanted for the role. We chose the actors for this project. This is a very timely film. And yes, this can also join film festivals abroad eventually.”

Since the pandemic started, “The Housemaid” is the first Filipino film to shown the theaters of the United Arab Emirates (Dubai, Abu Dhabi, Sharjah, Ajman, Ras Al Khaima, Umm Al Quwain and Al Ain). Starting September 17, it will be streamed over the entire Middle East and Europe.

“The Housemaid” is now available on Vivamax Philippines, Singapore, Malaysia, Hongkong, and Japan.