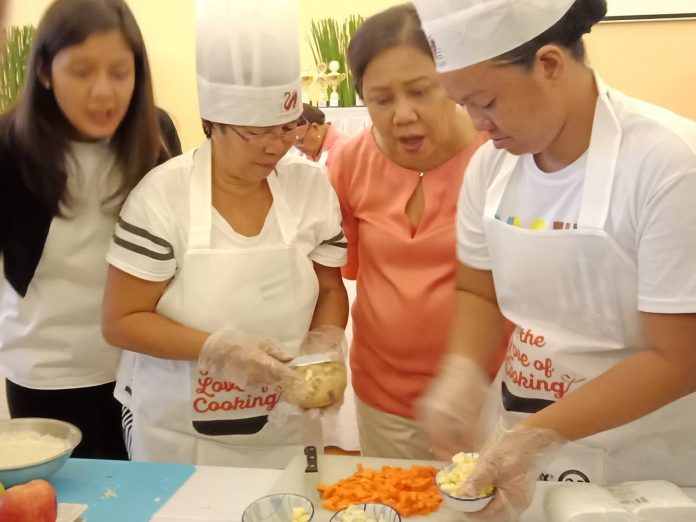 Newly re-elected Senator Cynthia Villar is sipag personified. The managing director of Villar Sipag, Mrs. Villar, has been promoting the local cuisine and  pushing for food security in her beloved hometown for six years now.

The recently concluded 6th Las Piñas Food Festival at the Villar Sipag Complex in Pulang Lupa Uno, Las Piñas City, was joined by thousands of Laspineros and people from nearby provinces.

“We are very glad that this food festival has become a yearly event for the city and nearby areas not only to promote our local delicacy, but also to promote our advocacy for safe and nutritious food,” Villar said.

“As we conduct it every year, we aim to encourage more of our countrymen to plant their own crops, which will eventually turn into their source of livelihood and income,” she added.

Since the launch of the food festival in 2013, Villar said there had been an increase in the participants for various festivities such as the cooking competition and urban gardening.

The cooking competition was participated in by the city’s 20 barangays with each team presenting 1 viand (ulam) and 1 dessert expressing the theme “Cook Healthy, Eat Happy.” Declared champion was Barangay Pamplona Uno which got P20,000.00 with runners up receiving P15,000. and P10,000 respectively.

A food retailer’s fair was also featured during the festival where micro and small enterprises from Las Pinas and nearby areas of Cavite, Muntinlupa, Pasay and Quezon City promote their products and Services.

According to Villar the annual activity has been successfully promoting food tourism, urban gardening and the city’s culinary heritage, as well as provide a platform for Las Piñas entrepreneurs to showcase their products and services.

The good senator doesn’t stop her livelihood advocacy in Las Piñas. She recently asked a group of women in Cavite to make marketing and utility bags for the  tarpaulin recycling project using her campaign materials.

Christine Joy Ferrer, 27,  of MXD Tailoring started the project at the garage of her rented apartment. She borrowed her sewing machines from her sister who’s shop recently closed.

“I have just started with my own business two months ago and here  Sen. Villar commissioned me to do the bags. This is a big help for me and  my sewers,“ said Ferrer.

The chairwoman of the Committee on Environment and Natural Resources, Villar said: “We are very glad that we have now a way for the proper disposal of these used tarpaulins. Through this initiative, we were not only able to recycle used tarpaulins into something useful, we were also able to help women earn additional income for their families.”

These “environment-friendly substitute” to the usual plastic bags will be given for free to push the senator’s advocacy on plastic recycling.

In Las Piñas, a 20 kilo soft plastics like food wrappers are recyled  and turned into  plastic chair which are given for free in public schools nationwide.