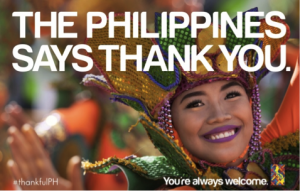 Filipinos are known for resiliency, positive outlook and ability to be happy despite odds and unfavorable circumstances. Super Typhoon Yolanda (international name: Haiyan) wrecked havoc in the lives and properties of many Filipinos in Eastern Visayas.

And the whole world came forward to help the Philippines through various help that is beyond our imagination.

Three months after Haiyan made landfall on the land, the #PHthankyou movement was initiated and created by Filipino volunteer workers and advocacy groups through social media. Messages and images expressing the Filipino people’s gratitude and appreciation for the help that the country has received circulated in blogs, Twitter, and Facebook.

Seeing this outpouring of appreciation from the Filipino people, the Department of Tourism decided to join the movement and created a visual thank you message, together with its advertising agency BBDO-Guerrero, that would represent the collective gratitude of the Filipino people that has been expressed repeatedly through social media. The world witnessed the simultaneous display of “Thank You” print ads in the world’s most iconic cities such as New York, Paris, Berlin, London, Toronto, Seoul, Tokyo, Singapore, and Sydney. In social media, a video depicting different ways of expressing the Filipino people’s heartfelt appreciation for the global support and encouragement was also shared and circulated by netizens, making it a top-trending video in no time.

With the support of social media influencers such as Gang Badoy of volunteer group RockEd, Jim Paredes of Apo Hiking Society, Kiefer Ravena of the Ateneo Blue Eagles basketball team, and celebrity endorser Mikael Daez among others, the campaign became viral and was picked up by international media platforms such as CNN and BBC.

DOT’s #PHThankYou campaign was dully recognized by bagging this year’s Grand Kidlat Award or Best of Show for the Kidlat Awards 2015 held in Boracay Island from 5-7 March 2015. “This award belongs to the Filipino people, more than it is for the DOT. We were simply the medium through which the Filipinos voiced their gratitude for the overwhelming support and solidarity of people from around the world. And the Filipino people were right when they thought that the first step in moving forward is saying thank you,” Secretary Ramon R. Jimenez, Jr. said.