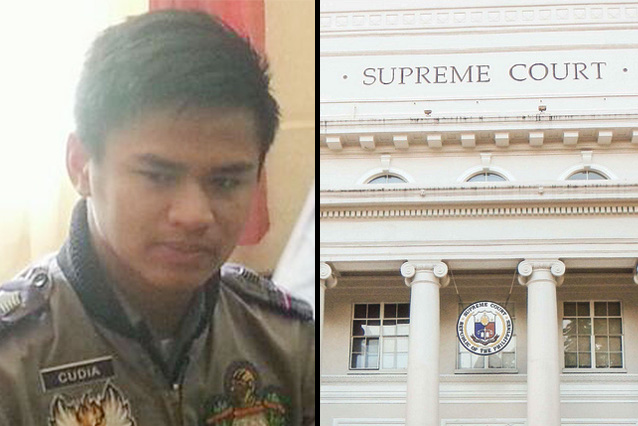 A month after the Supreme Court (SC) junked his appeal to get a diploma from the military school, the young cadet issued a statement on Monday, March 23:

This is the first time that Cudia spoke on the issue. The Public Attorney’s Office (PAO) later in the day filed his appeal which asked the Supreme Court to reverse its ruling that affirmed his dismissal from the PMA.

In a motion for reconsideration (MR), the camp of Cudia asked the high tribunal to “take a second hard look” at the facts and circumstances of the diamissed cadet’s case, saying the PMA, the PMA-Honor Committee of 2014 (HC) and the PMA-Cadet Review and Appeals Board (CRAB) had failed to “satisfy even the minimum standards of due process.”

Cudia, who was supposed to graduate salutatorian of the PMA Class 2014, was dismissed at the academy for supposedly lying about the reason he was two minutes late for a class. The school received widespread flak online over what is perceived to be a petty reason to dismiss a graduating cadet.

Aside from the PAO, the Commission on Human Rights called for the reversal of the PMA ruling. The SC ruling said, however, that the PMA Honor Code should be respected.

In its ruling last February, the SC said the PMA did not violate Cudia’s right to due process when it enforced its rules on discipline, including the Honor Code, for lying.

The high tribunal said the case is “subsumed under (the PMA’s) academic freedom” because the establishment of rules governing university-student relations, particularly those pertaining to student discipline, may be regarded as vital, not merely to the smooth and efficient operation of the institution, but to its very survival.” But in its MR, Cudia clarified that it respects the PMA’s academic freedom and does not “seek to deprive” the school of its rights.

“Like any other right, however, academic freedom has never been meant to be an unabridged license. It is a privilege that assumes a correlative duty to exercise it responsibly,” Cudia’s motion read.

“But, it is one thing to say that the PMA enjoys said freedom to establish a disciplinary system and impose disciplinary action against an alleged erring cadet; quite another to conclude that in the process, a cadet did not suffer serious transgressions of his constitutional rights,” it added.

Cudia’s camp insisted that disciplinary proceedings, even in a military academy, must be conducted within the bounds of procedural due process.

“Truly, it cannot be used as a tool in violating the constitutional and human rights of a person,” it added.

Cudia cited Article 19 of the Civil Code, which states that ever “person must, in the exercise of his rights and in the performance of his duties, act with justice, give everyone his due, and observe honesty and good faith.”

We have seen the young cadet in several instances. He struck as to be mild-mannered, well-disciplined and unassuming. And while waiting for the resolution of his case, he has volunteered for the medical mission/jail decongestion program of the PAO by visiting various prisons and penitentiaries in the country. With his intelligence couple with good looks, Cudia is destined for the best in career and life.

With PAO and his family, the PSR wish justice for Cudia!