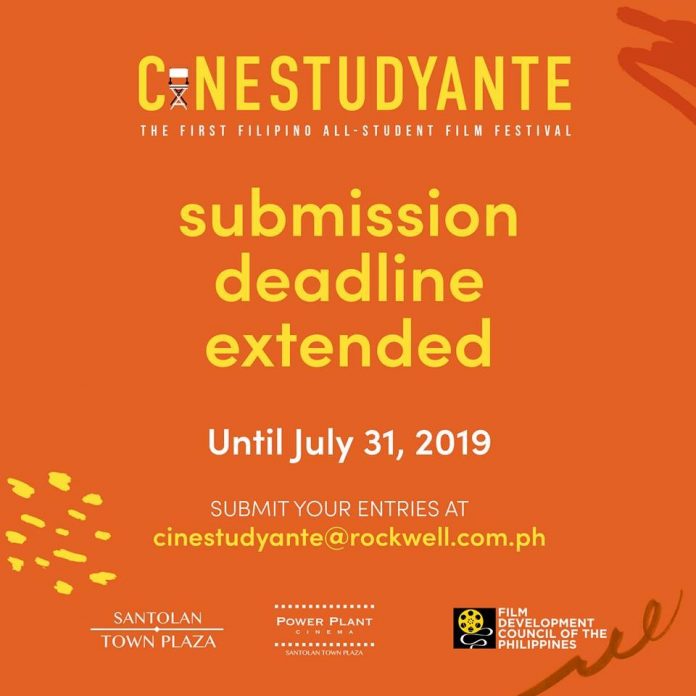 The deadline of submission of entries to CINESTUDYANTE, the first Filipino All-Student Film Festival, has been extended until July 31, 2019. The film festival is open to all high school and undergraduate students from colleges and universities around the Philippines. Submissions may be in Filipino, a combination of English and Tagalog, or any of the country’s regional languages (with English subtitles).

CINESTUDYANTE will only accept works produced from January 2017 to June 2019. The works of alumni of a school may still be submitted, as long as the film was produced at the time its creators were still students. Works done post-graduation of college students are not eligible for submission. However, works of senior high school students enrolled in their freshman college year can still be accepted.

Submissions must have a maximum running time of twenty (20) minutes, inclusive of OBB and CBB (opening and closing credits). Short shorts or microfilms (with a running time of three minutes or less) are also accepted.

All documentary film submissions must include necessary waivers and permits from those directly or indirectly involved as the subject of production.

Entries to CINESTUDYANTE are accepted through two means: (1) Communication or film departments or programs of colleges and universities may nominate outstanding works of their students. Each school can submit as many nominations as they deem representative of their best works; and (2) Individual or groups of students may submit their works, as long as they have an endorsement from the Program or Department Chairperson responsible for their film or broadcasting courses. Again, students may submit as many entries as they want but with the proper endorsement of their school authorities.

Schools and individual or group of students certified by their schools must submit their entries via email to cinestudyante@rockwell.com.ph, in the form of links via Vimeo or YouTube with proper identification and password. Each entry exceeding five minutes of running time must be submitted as an individual link. Clusters of microfilms may be combined to a single link for purposes of submission.

There shall be a total of four (4) clusters which will be programmed by the Screening Committee which will carry a total running time of one hundred (100) minutes per grouping. Each grouping shall include a cross section of all the genres included in the festival. Thus, each cluster can have a minimum of five (5) films or an undetermined maximum corresponding to the completion of the said total running time. These films will be shown in rotating schedules at assigned cinemas at the Santolan Town Plaza.

A minimum of twenty (20) films will be selected from among these submissions. A Selection Committee shall be comprised of the following: (1) Festival Director and Chairman of the Selection Committee; (2) Festival Programmer; (3) Festival Coordinator; (4) Two representatives from the colleges and universities participating in the festival; and (5) Representative from Rockwell, the major sponsor of the festival.

A profit-sharing scheme has been drawn by Rockwell in which a 50/50 share between the cinema and the students based on the box office receipts of their films will be implemented. The best performing cluster will be shown on a regular screening at the Power Plant Mall cinemas at Rockwell Center Makati.