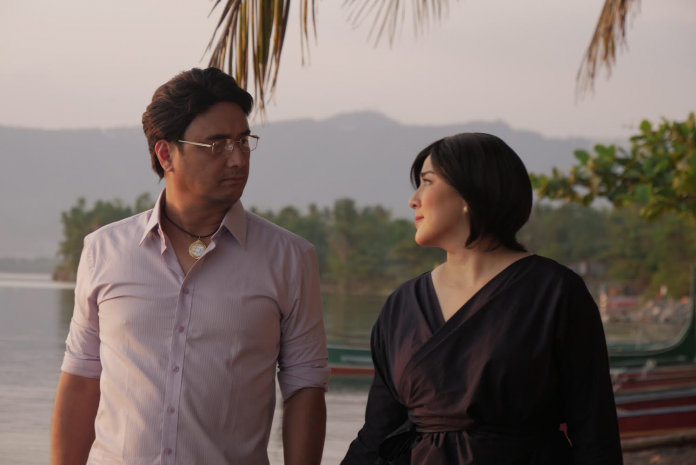 Less than 24 hours before MAYOR ANTONIO HALILI was assassinated while having the flag ceremony at the newly constructed municipal town hall of Tanauan City Batangas, veteran journalist and film director CEASAR SORIANO was able to interview the equally popular and feisty mayor.

The interview was supposedly geared towards SORIANO’s plan of making a bio-pic about the life of the controversial mayor.

In the said interview, the well-loved mayor poured out his strong staunch about fighting illegal drugs, the controversies surrounding his walk of shame “arade” campaign, his private life and all his dreams and aspirations for his dear town.

But by a strange twist of faith, MAYOR ANTONIO HALILI was gunned down by unknown assailant on that dreadful morning of July 1, 2018. But being a good friend that he is, SORIANO still stands firmly to push through with the plan of making the movie.

“THE LAST INTERVIEW:  THE MAYOR ANTONIO HALILI STORY”depicts about the colorful life of MAYOR ANTONIO HALILI told in the point of view  of the last journalist (SORIANO) who managed to have an in-depth interview with the departed mayor.  This movie serves as a tribute for the well-loved Tanaueno who will forever live in his town folks’ hearts.

He served as the mayor of Tanuan, Batangas from 2013 to 2018.  He was assassinated during the flag ceremony in his hometown on July 2018.

Angelina, fondly called as Gina, is the wife of the late mayor Tony Halili.

CEASAR SORIANO as Himself

Ceasar is a veteran broadcast journalist who was able to discuss to Mayor Halili his plans of making a biopic about the life of the controversial mayor.

Ceasar Soriano, the director of the film, entered the media industry as a broadcast journalist.  He is a former Chief Mindanao News Bureau of ABS-CBN.  He also worked as a news anchor in DZIQ Radyo Inquirer 990 AM.

Currently, he is the news anchor for “Ulat Bayan,” a weekend news program of PTV4.  He also hosts “Magandang Gabi Pilipinas” and “Isyu One On One.”

He made his film debut with “Ang Misyon:  A Marawi Siege Story” on 2018. He owns GreatCzar Media Productions, a media production established in 2016 that specializes on social awareness shows – through television and film.

Q & A with Director-Producer CEASAR SORIANO

Why did you think of doing the life story of Mayor ANTONIO HALILI, the Mayor of Tanuan, Batangas who was assassinated last year during their flag ceremony?

“When I was a reporter, I was very fascinated and obsessed in understanding the harsh and not normal parading of drug pushers and drug users.  I came to know that this mayor was accused of human rights violations, parading the drug pushers and users.

“So, I wanted to know why was he doing that?  What motivated him? What was the reason, what was his driving force why he has to parade these drug pushers and users?  So, to me, it’s very interesting.  Especially there’s this war on drugs of President Duterte.

“I find it so interesting dahil isa siyang Mayor na marami ring kalaban.  I interviewed him and I told him, I will do a movie na ganito.  For how many weeks, nag-haggle kami about his story.  He was still alive then.  That very night, for four hours, he agreed to be interviewed, and finalized our production of the movie. “

Didn’t Mayor Tony Halili have second thoughts of having his life made as a movie?

“Kahit na mag-dalawang isip siya, talagang ininsist ko siya.  He has no choice! So, ‘yun, for four hours, he revealed everything.  It was so unfortunate that the following day, he was assassinated!  And in that interview, he already sensed na parang iba ‘yung magiging kahinatnan, because our questions were like, ‘O, pinatay na si Parohinog, Espinosa… Baka ikaw na ang kasunod?’

“So, when he was assassinated, wala na! Parang ayoko na, kasi, wala na siya, eh.  But he kept on appearing in my dreams. Parang, ‘Ano ba, bakit hindi mo gagawin (ang pelikula)?’   So, nag-decide akong gawin para maipakita ko na there is this Mayor who served his town, booted out from the list of  Mayors na kailangang bigyan ng secutiry.  Because he was involved in drugs, na nasa Drug Watch List ng Presidente.

“But it was so interesting to know that fateful morning during the flag ceremony, he was assassinated.  Who killed him? Why was he killed? And what’s the story behind?”

Did they have a personal or professional relationship with the late Mayor?

What were the challenges that he encountered in doing this film, especially that his lead subject is already dead?

Why did you choose JOHN ESTRADA to portray the lead character in “The Last Interview:  The Mayor Antonio Halili Story”?

Is this not a politically-motivated film?

What lesson can the moviegoers get in watching this movie?