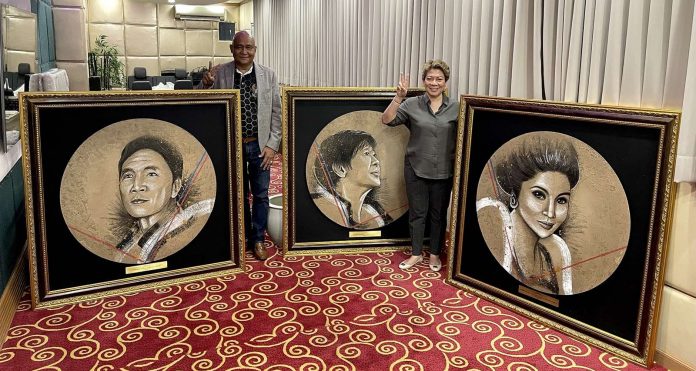 Towards the nearing season of filing for candidacy for the 2022 elections, commissioned portraits of the Marcos family emerge.

We got to chat with “Artist on a Mission,” Kristine Lim, who painted the said portraits of the late former president Ferdinand Marcos, former first lady Imelda and their children, Irene, Congresswoman Imee and former senator Bong Bong Marcos, and asked her if she’s pro-Marcos.

“I’m pro-God. I regard theocracy to always be above democracy. If we are to follow God’s governance then we have to accept what was stated in 1 Peter 2:13; ‘Submit yourselves for the Lord’s sake to every human institution, whether to a king as the one in authority, or to governors as sent by Him’. I believe former president Ferdinand Marcos was a rightful leader, as well as all the other leaders that we had, have and will have. They would not have been put in position if it weren’t God’s will,” said Lim.

We also asked the artist and missionary why she decided to take the project knowing the possible unfavorable comments and criticisms from the controversial political family.

Lim’s response left us further speechless. “Our God is a God of All. I work for the Lord and if my Master doesn’t discriminate then who am I to choose who to paint and who not to paint?” She also adds, “Everyone has critics. Jesus had critics. They spat on Him, cursed Him, tortured Him and nailed Him on the cross but He loved them anyway. Who am I, a sinner, to do or say otherwise?”

The portraits were commissioned by husband and wife, Phil Marcelo Villamar, Ph.D and Eleonor Villamar (long-time friends of the Marcoses from San Miguel, Pangasinan), to be given to the Marcos family this birthmonth of former first lady Imelda Marcos (who celebrated her 92nd birthday on July 2) as a sincere gesture of their unending support.

Mr. Villamar is also said to be running for congress in the 2022 elections in his hometown which would be the businessman’s first time to try the politics.