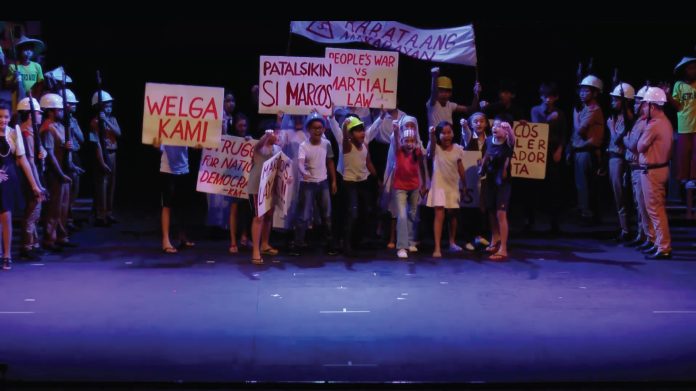 Augie Rivera’s Isang Harding Papel, A Martial Law Musical  is based on a true story, the film is about a 7-year-old child named Jenny and her mother, Chit, an actress imprisoned for staging a street play critical of the dictatorship of President Ferdinand Marcos.

Jenny’s visits are peppered with stories she collects and saves to share with her mother.  During each visit, Jenny’s  Mom gifts her with a paper flower she made herself. Eventually, Jenny’s collection of paper flowers resembles a lush garden.

The play is the author’s way to explain to children the big issues of Martial Law, one of the darkest chapters of the nation’s history. It also zeroes in on the impact of the dictatorship on a personal level.

Isang Harding Papel, directed by Nor Domingo, is a filmed version of the musical of the same title, adapted from the Adarna House children’s book illustrated by Rommel Joson.

It was written for the stage by Nanoy Rafael and adapted for the Stage by Cacy Abadeza, Sofia Baybay, Isabel de la Cruz, Ella Francia, and Nanoy Rafael. Music is by Thea Tolentino, production design by Boni Juan.

The actors in the musical are the talented pre-school and grade school students of Raya School, a progressive school based in Quezon City.

The film starts streaming on February 25.

In the same week, aside from Isang Harding Papel,  Dokyu Power also streams “The Kingmaker “ by Lauren Greenfield.

All films in the festival are free of charge.

The Dokyu Power fest streams from February 25 until April 9, 2022. It is organized by DAKILA and its Active Vista Center, and the Filipino Documentary Society or FilDocs, the same group behind the 2020 documentary film festival “Daang Dokyu.” It is supported by the Purin Film Fund and Rappler’s Move.ph.