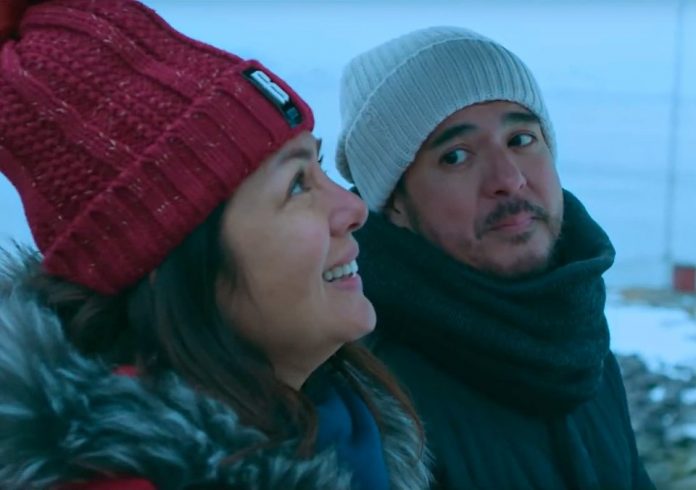 The Aga Muhlach-Alice Dixson starrer “Nuuk” will be opening the fifth edition of  Danish Film Festival happening at the Red Carpet Cinema of Shangri-La Plaza mall in Mandaluyong this October.

“Nuuk” a film by written by Erwin Blanco  and directed by Veronica Velasco is the first Filipino film shot in Greenland, an autonomous region within the Kingdom of Denmark.

The film tells the story of Elaisa Svendsen (Dixson), a Filipino migrant worker in Nuuk who is struggling to move on from the recent death of her husband. Her life takes an unexpected turn when he meets fellow Filipino Mark Alvarez (Muhlach).

The film also delves on important mental health issues related to one’s environment, and how love and loneliness can affect the many decision we make in our lives.

According to the film’s writer, Blanco, the story is based on a documentary set in Greenland about a young girl who committed suicide after a failed relationship.

Aside from Nuuk, nine acclaimed full-length Danish films will be screened from October 9 to 13 at Cinema 4 of the Red Carpet, Shangri-La Plaza mall in Mandaluyong.

“Darling” is a moving love story of a dancer on the roller coaster ride of her life, a drama about the rise and fall of a modern woman as she summons the courage of her greatest trial.

“The Charmer” is an intense psychological drama about a young Iranian man who is desperately looking to meet women who could secure his stay in Denmark.

“I am William” is about a young boy who is forced to live with his uncle following the death of his father and separation from his mentally-ill mother.

“Across The Waters” is a period movie about a family of Danish Jews who flee their home to seek refuge in Sweden and escape deportation by the Nazis in 1943.

“A Fortunate Man” is about the story of an ambitious young man in the late 19th century who rebels against his strict father by traveling to the capital to study.

“Team Hurricane” is a highly stylized collage-like portrait of a group of teenage girls who network through social media.

“Circleen, Coco & the Wild Rhinoceros” is an animation about  Circleen, a matchbook-sized elf , her motley crew-mice, a baby rhino and a Princess named Coco who embark on an exciting journey to Africa.

“Ordet” is a classic 1955 Danish film by Carl Theodor Dreyer based on a play by Kaj Munk, a Danish Lutheran priest,  that examines the conflict between  personal faith and organized religion.

“The Day Will Come” is based on real stories in an orphanage in Govhavn, where boys become victims of sexual abuse and medical neglect.

Admission to the screenings is free to the public  on a first come-first served basis.