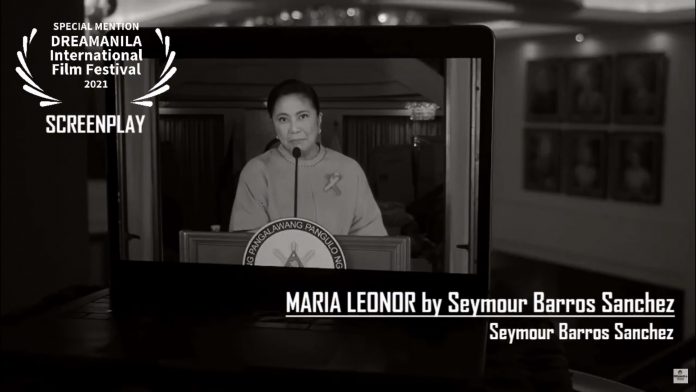 An epistolary documentary focused on a government office’s pandemic response efforts got a Special Mention award for its screenplay at the 3rd Dreamanila International Film Festival last November 22.

“Maria Leonor,” a short documentary written and directed by filmmaker-educator Seymour Barros Sanchez in the form of an open letter, delves into the Filipino voter’s psyche as it trains its sight on the Office of the Vice President led by VP Leni Robredo.

It is an offshoot of his full-length project “Leading Lady” funded by the Centre for Global Business of the Monash Business School in Australia.

“Even the age of modern pandemic cannot simply stifle their sustained growth – and films have become, more than ever, a powerful tool to document lived experiences,” Dreamanila Founder and Executive Director Archie Del Mundo shared in a statement he signed with head of festival programming Joselito Altarejos, creative director Lemuel Lorca and associate programmer Robert Cerda.

Only 56 films were selected to compete out of more than 500 submissions to the festival, which had International Full Features, International Short Features, Philippine Shorts, and Screenwriting categories.

Altarejos and Lorca, both award-winning filmmakers, and film scholars Cerda and Jerrick David comprised the Dreamanila film festival jury and board members.

The festival had 15 competing films during its inaugural run at the Dream Theater of the then Carl Balita Productions in 2019.

When the pandemic lockdown happened last year, over 30 finalists were shown via Facebook Live streaming platform on its FB page (https://www.facebook.com/dreamanila).

This year, it was streamed via The Dreamanila Network (https://www.youtube.com/c/TheDreamanilaNetwork).

“Maria Leonor” is also competing at the Lift-Off Global Network Sessions this month. Based at Pinewood Studios, United Kingdom, Lift-Off features a broad range of new and emerging indie content and focuses on “fostering a digital connection with new global audiences, connecting them with a broad range of grassroots indie film talent.”

The festival also runs online from Nov. 15 to 29 via Vimeo on Demand.

The film may also be viewed at the De La Salle-College of Saint Benilde Center for Campus Art website as part of the online art exhibition “To Differ Digitally 2: Love and Dissent in the Time of Pandemic” (https://www.benildecampusart.com/exhibit/to-differ-digitally).

The project is a collaboration between the CCA headed by Architect Gerry Torres and the DLS-CSB New Media Cluster under Associate Dean Maria Sharon Mapa Arriola.

This is the second time in four years that the CCA is spearheading this kind of undertaking with NMC faculty. Karen Ocampo-Flores co-curated the online exhibit with Torres.